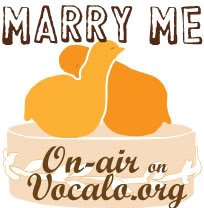 Chicago Public Media created Vocalo.org to experiment in a media-scape where everything’s online, interactive, and mobile.

In June 2009, we pulled together some tools and techniques we’d been developing– especially a hotline that allowed users to post audio stories to our web site from their cellphones– to stage a good old-fashioned 21st Century DIY wedding contest!

Everyone on our staff put a ton into the project, and I got to coordinate the monster, write the rulebook, and build the online presence.

Here are a few highlights– including five clips (a minute or less each)– from this month-long project:

First, we made an offer:

… and we’ll chip in to get you the marriage license. Can’t beat that with a stick.

Here’s what you’ve gotta do to get it:

Just as we’d hoped, many of the stories were appealingly quirky.

For instance: Violet had been Mike’s next-door neighbor for five years when she invited him to a holiday party. He arrived to find himself the only guest.

And that was 12 years ago.  No one could accuse Mike of jumping the gun.  Except that when he called us, he hadn’t actually proposed yet.  So there’s that.

Meanwhile, there was an early favorite:  Lindsey met Kevin when he stopped by the roadside to help her get her bike chain back on the crankset.  She said, “I’m gonna marry that guy someday…”  She was ten.

Needless to say, it didn’t happen right away.  They hung in different circles at school and didn’t get together until after college.  Then, it was on.

Their story also had an element of pathos:

The contest was a back-and-forth between the web and the broadcast.  Our hosts interviewed the couples live on-air, which added some interesting details.

… like the couple who really needed to win (interviewed here by Luis), because it would solve a critical problem in their relationship:  fighting over where and when and how to get married.

Vocalo celebrates regular people as storytellers, media-makers, and “everyday experts,” so we convened a citizen’s panel of experts– including a guy we’d met in front of a West Side barbeque joint where we were doing a broadcast– to do their deliberating on-air.

When they made their decision, we called the winners live from the studio

… and didn’t reach them.  That’s me on this tape, leaving them a message:

Luckily, they called right back.  And so did the bride-to-be’s mom:

On June 25, Lindsey Bauer and Kevin Adank of Tulsa, Oklahoma, got hitched in the station’s cameo studio on Navy Pier! Scores of people watched through the window, and people tuned in from around the country.

The wedding was an all-day affair for us.

… and a bigger story than can be told here.

At least for right now.  But: My favorite memory is of the songs Lindsey and Kevin chose for their processional and recessional (as executed by the awesome duo of Lloyd and Chris).

Most of the audio on this page was originally edited by Robin Amer, Chris Clemente, and Jesse Seay.  (I’ve shortened it here.)   The voices you hear include Vocalo host/producers Luis Perez, Bibiana Adames, and Steve Walsh. And me.

The ridiculously talented, patient, and organized Vanessa Harris co-ordinated the logistics of the wedding itself, and took the pictures.

Sadly, most of the online elements of the contest– once lovingly archived at vocalo.org/marryme– got lost somewhere in Vocalo’s transition to a new content-management system in fall 2010.   But we’ve got the memories… and this page.