As ink-on-paper fades, wither the newsstand?

The newsstand at Main Street and Chicago Avenue in north-suburban Evanston is small but iconic—packed with magazines from all over, thousands of titles in all.

“If you want to get a magazine in Chicago, eventually you’re gonna find us, because what else are you gonna do?” says Michael Ulrich, who manages the shop, along with a similarly-insanely-comprehensive shop on the city’s Northwest Side.

But with the Death of Dead-Tree Publications sounding less like speculation every year, especially in brick-and-mortar stores—yes, Borders, I’m looking at you — how much longer can a business like this hang on?

Urlich’s boss, Joe Angelastri, hopes to keep both operations going for the long haul, and he’s looking for reasons to be optimistic.

As in: Maybe even the demise of Borders is good news.

“They had decent-sized newsstands in all their stores,” says Angelastri, “so with that gone, it leaves a little more room for the little guy.”

Their struggle opens a window onto the business of magazines, and of niche retail.  Their business model is cagier than it looks at first glance—although that may not save it in the long run. 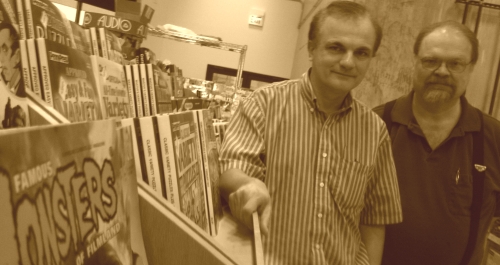 Angelastri is a lifer.  He bought the business more than 30 years ago, when he was 18 years old. “At the time, it did seem like an okay  thing to get into,” he says. “We did have a pretty good run with it.

In those first years, it was just an outdoor stand, ten feet by ten, with no plumbing and no heat except Coleman lanterns.  Angelastri kept the place open 24/7.

In 1988, the bookstore behind his stall closed up shop and Angelastri moved in.  “They gave us all the fixtures and everything,” he says, “so we went with it.”

And then corner newsstands started closing up.  Storefronts too.  The Evanston shop closed in 1993, but the city government recruited Angelastri to revive the shop.

By the time he re-opened it in 2001, newspaper people were starting to wonder how this Internet thing was going to play out for them.

“Population is going up, newsstand sales are going down,” says Bob Sacks, a consultant to magazine publishers (who made his name as a founding editor of High Times magazine).  “It’s not a pretty picture.”

How steep is the decline?  “It’s steep and getting steeper,” says Sacks.  “Three or four percent a year aggregates out to a huge number.”

The explosion of tablet computers has made the idea of digital magazines more attractive for customers—and publishers.  “Hearst sold 300,000 paid subscriptions” in 2011, Sacks says. “They’re aiming for a million in early 2012.”

And one of the old reliables for newsstand sales—porn—isn’t what it used to be.  As newsstand manager Michael Ulrich says, “The Internet has just taken all the gas out of the, uh, Men’s Sophisticates bag.”

“More recently we’re trying to make it work with less volume,” Angelastri says. “It’s difficult.  We try to increase our margins, try to lower our costs so we can stay in business.  But yeah, sales have been declining.”

In an attempt to reverse the trend, Angelastri is making a big bet on a new product line for the Chicago location:  Espresso.  With the City of Chicago picking up half the $300,000 tab, he’s rehabbing the Northwest Side shop and adding a coffee bar.

Thing is, espresso doesn’t seem like the most promising business line in this distinctly blue-collar retail district. Cars outnumber pedestrians by a zillion to one, there’s a Sears across the street, a payday-loan shop next door, and another one around the corner.

But they’ve gotta work with what they have.

“First of all, we own the building,” says Ulrich. “It’s not like we can just pick up the building and go.

And even if the coffee thing does okay, it’s hard to see this working out over time, especially considering how the magazine side of the business really works.

The dynamics are surprising.

Ulrich takes me on a tour of the racks, starting with the puzzle books.  The selection is dazzling—and confusing:  Who on earth needs 20 Sudoku titles?  Couldn’t they just stock ten?

“That would be so against our general philosophy, we would never say that,” Ulrich says. “Our philosophy has been, let’s carry everything we can legally carry. We have the space for it—let’s get it.”

That’s doable because they get all those magazines on consignment—that’s how the industry operates.  So once they’ve paid their rent, carrying 20 Sudoku books doesn’t cost much more than carrying ten.

And carrying 20 Sudoku books instead of ten is the whole point, says Ulrich. “Our niche is that we carry everything,” he explains. “It’s the buffet mentality.  You go to a buffet you’re not going to eat everything. You’re not going to have mashed potatoes, rice and noodles.  But the fact that it’s all available to you makes the whole venue very attractive.”

So what else is on the menu?

Among Ulrich’s favorites: “I like Baby Bug,” he says. “This magazines is actually for babies.”

By definition, there are too many to list.  Turns out, there are multiple slick magazines devoted to coin collecting.  Sixty-dollar fashion magazines from Europe.  The number of food titles has doubled in the last bunch of years.  Ditto tattoo books.  And it turns out Soldier of Fortune has imitators.

And of course, Fire Apparatus Journal.  “Um, yeah,” Ulrich says, giving it a closer look.  “That’s all about fire trucks.”

There’s a rush to seeing this crazy over-abundance of stuff.  But it’s hard to shake the feeling that there’s not much future in it.  After all, information overload just isn’t as hard to come by as it used to be.

“It’s still hard to believe that the whole ink-and-paper thing is going to go away,” Angelastri says.

“Plus, we’re only in our fifties,” Ulrich adds. “So it only has to be another 20 years or so. We don’t need it to last forever—we’re not gonna last forever.”

Me, I just hope they’re still around when my two year-old learns to read.